Burundi’s president, Évariste Ndayishimiye, plans to fire all married government officials who have concubines or are involved in extramarital affairs.
The directive is said to have been conceived by Minister of Internal Security Gervais Ndirakobuca as a means of restoring sanity to the country beginning at the top.

Meanwhile, the move has sparked a social media debate. 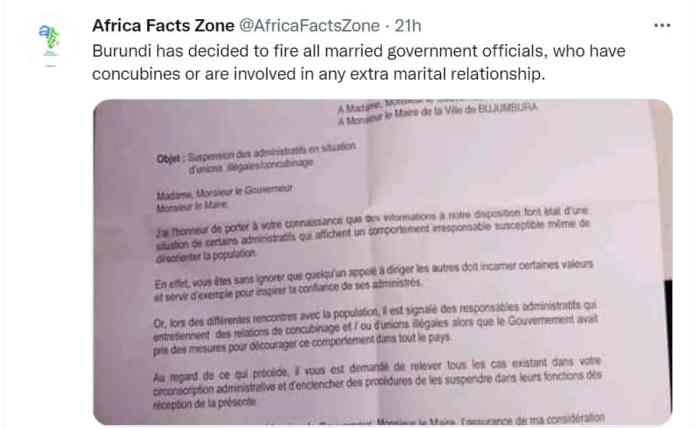 While some applauded the move, others were unimpressed, arguing that the government should focus on fighting corruption rather than extramarital affairs.

Read some of the comments below;-

“Hahaha….when the government has nothing to do, all I have to do is meddle in people’s affairs.”

“It’s pointless; they should devote their efforts to combating corruption rather than this nonsense.” African states can do anything to oppress people, but they will never fight government corruption and inequality.”

“It’s their private life.” Nonetheless, if they see it as appropriate, good for them.”

“That’s a new level of moral value.” Impressive for an African country.”

“African nations should embrace their traditional polygamous culture.” “Westernization benefits no one.”